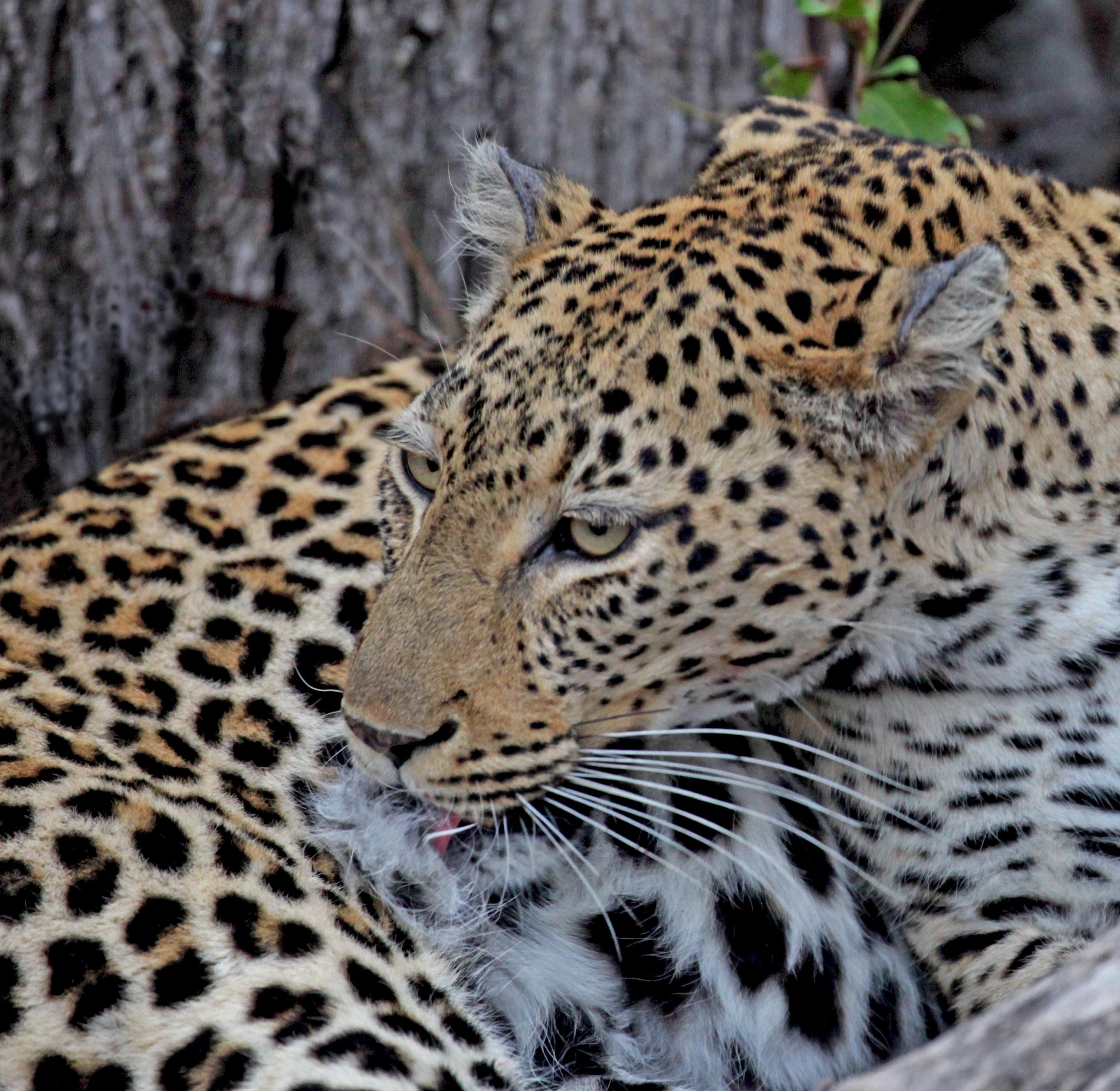 A leopard in daylight in tree with her kill for three days! She brought her kill down to ground then we saw her take it up the tree! Sunlight in her eyes making wonderful photo ops.

In an open field we noticed giraffes were standing very still and seemed to sense danger when we noticed a leopard stalking them!

The driver and tracker left our vehicle to follow female lion tracks but came back just knowing there were recent tracks of lion being close by. Later that day we found a couple of males sleeping and sat and watched them wake up for their night shift!

White rhino was nursing her 3 year old baby, again very close to our vehicle. A private game reserve allows you to drive over bushes to get up close to special sightings!

Honey badgers are not commonly seen but we felt lucky to see the three times!

Zululand provided us an exciting time learning about their traditional customs - dancing, beer making a show they make such beautiful jewelry and clothing from skins and beads!

A close encounter with 25 elephants surrounding our vehicle. So close that one had her trunk on the Jeep! The younger ones were grumbling and that was scary as there were some young babies in the herd!

Well we also had to get out of the Jeep as we had a tire puncture where the elephants were passing through! The ranger and tracker worker at top speed to get it changed for us. We hoped that we would not get another as the terrain was very hilly and bushy making for a very bumpy ride!

Cape Town - a city with so much to do and see! We spent an afternoon on the double decker bus touring around the city and its' outskirts marvelling at the beauty of the mountains and oceans.

Cape Point and Mariners Wharf for yummy fresh fish and chips by the sea was a delightful outing after we stopped to photograph the proteas in bloom!

Gems for the ladies! Yes an appt. was made to have a special presentation of tanzanite and diamonds!

Stellenbosch wineyards and the scrumptious four course dinner paired with Clos Malverne wines was a terrific outing for everyone! No lack of food or libations here

Greenmarket Square got to know us quite well! Tanblecloths in African cottons, wooden bowls, leather, jewelry and ma y interesting items for gifts!

San or Bushmen - well today there were three Bushmen who came into a shop while I was there! They were dressed in their typical garb of burlap, wooly hair in knots and bare feet.

We talked to them and found out they lived in the mountains and collected semi precious stones for a living. After agreeing to let us take some photos they asked for lunch money, so of course it only fair to do so!

So much to do in Cape Town but all good times must come to an end!

Tomorrow we leave for Namibia so stay tuned!

Ask about your trip

October 23 - November 6 2018Join us on a “Wildlife Journey” to photograph the animal kingdom in t... + ASK ABOUT THIS

Things We Blogged About

Get the Travel Tips